Almost all went by train or bus or coach. A few even cycled. 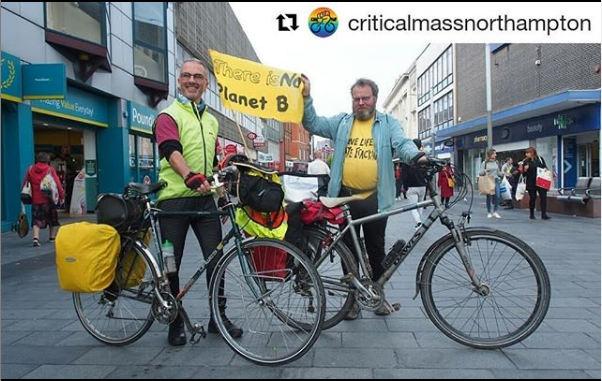 Most of us travelled by train or coach, some car shared and equipment was moved partly by electric cars and vans.  Dave Clasby and a friend cycled from Derby to London over three days (see left) to highlight the need for improved cycling and walking infrastructure in Britain.  Each leg of the journey highlighted what local people in each area experience and what it needs to improve.  Once in London we walked, used the tube or took the bus.

It is an easy jibe to ask these questions, but such criticisms miss the point: we are forced to protest in this way in the capital because for many decades the traditional marches, emails, petitions and lobbying of MPs have failed. But it also plays into the hands of the fossil fuel companies, media and advertisers by supporting the lie that it is mainly the responsibility of individuals to solve the climate crisis and biodiversity loss. “If you just buy a reusable cup, everything will be alright.” It is inevitable that everyone appears to be a hypocrite because at present everything we do is based upon a political system, an infrastructure and a consumer system paying little or no attention to the environment. We are all part of the system and we demand better choices. We try to achieve a balance and whenever we can we always select the least damaging green option.

A particular target are a few massive multinational companies that are responsible, directly or indirectly, for a majority of the world’s polluting emissions. Personal choices are important when getting our message across, by showing there are alternatives and not adding to emissions, biodiversity loss and cruelty caused by animal agriculture, fast fashion, travel and heavy industries. However, nothing we do as individuals compares with the 85% of CO2 emissions produced by large corporations (as explained in The New Internationalist 2018). The most valuable thing is to put pressure on governments to put controls on production and transform our way of life.

The New Internationalist (2018) “If we all became vegan tomorrow”

The Guardian (2019) Revealed: the 20 firms behind a third of all carbon emissions: