The A38 road works in Derby are part of a £27 billion Road Investment Strategy 2 (RIS2) by the Department for Transport that completely goes against the UK’s carbon reduction targets.

Transport Action Network have 3 days left on a crowd funder to take the Dept for Transport to court. So far the DfT have delayed to reply and asked for extensions. Join it.​ 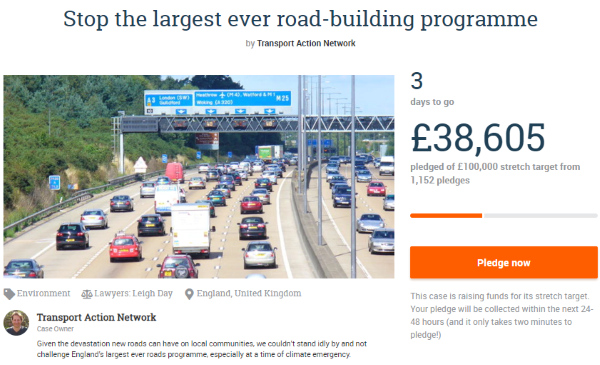 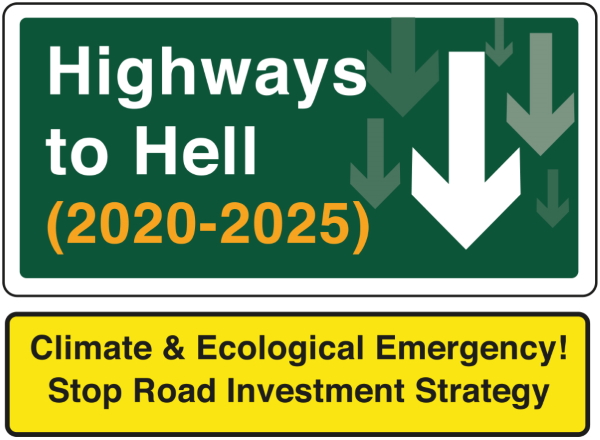 How road-building contributes to the climate and ecological emergency

How bad is road transport for the climate?

Transport is the UK’s worst performing sector for carbon reduction and the only sector where emissions are still going up. If international aviation and shipping are included it is responsible for over a third of UK greenhouse gas emissions. Road transport accounts for the majority (two-thirds) of total transport emissions. Around two-fifths of these emissions are from motorways and trunk roads managed by Highways England and the remainder are from A roads and minor roads managed by local councils.

How bad are roads for wildlife?

New roads have devastating impacts on wildlife and their habitats. More than half (49 out of 86) of all major road schemes built between 2002-2018 have affected areas that were nationally or locally protected because of their wildlife, landscape or heritage values.  Since 2002 there have been 14 major road schemes that damaged ancient woodland; 6 schemes that impacted Sites of Special Scientific Interest; 11 schemes that affected Areas of Outstanding Natural Beauty and three schemes that cut through or close to National Parks. As well as the impacts on their habitats, millions of wild birds and animals are killed each year on our roads.

What is the government doing to address these problems?

The Department for Transport has started consulting on a decarbonisation plan for transport. The Secretary of State for Transport has acknowledged that we need to rely on cars less. The plan clearly shows that we are not even on track to meet the old carbon budgets let alone Paris-compliant ones.

Yet instead of reducing road traffic the government is planning to make the problem a lot worse by building more roads. A lot more roads. Between 2015-20 the government allocated more than £15 billion to Highways England for the first Road Investment Strategy (RIS1). In the 2018 budget the Chancellor went further announcing the government would deliver “the largest ever strategic road investment package from 2020-2025” known as RIS2. In March the Government confirmed that RIS2 would cost over £27 billion over 5 years. In addition, the government will also provide £3.5 billion for road schemes on local authority roads, while other government funds and developer-contributions are also being used for road building.

What should local XR groups do?

There are plans for major new roads in every region. In England there are 48 RIS2 schemes planned plus 15 RIS1 schemes under construction and further RIS3 schemes in the pipeline. All of these will wreak havoc on local environments. For example:

It is hard to defeat these large schemes on a case by case basis. XR groups need to work together to lobby the Department for Transport to pull the plug on the funding, both to meet our climate targets and to avoid unnecessary ecological damage. We need to get the message out that £27 billion can be better spent on projects that create jobs while protecting the environment and making people’s lives better.  A list of the RIS2 schemes and the corresponding XR groups can be seen at the end of this briefing. XR members can also support a new legal challenge against RIS2 by Transport Action Network.

But don’t new roads solve congestion and help the economy?

New roads don’t solve congestion (except very temporarily) they make it worse. Evidence for over 100 years shows that new roads encourage new journeys and open up land for car-dependent development which creates more traffic.  This leads to a vicious circle of more congestion, more roads, more development, more traffic. A widely held assumption that building roads creates economic growth is not backed up by on-the-ground evidence. An analysis of road schemes that had been justified on the grounds that they would boost the local economy, found that three quarters had weak or no evidence of economic benefits, and where there was evidence it was not clear the benefits were very significant or what was intended. However because of a very biased and misleading appraisal system the ‘benefits’ of roads, mainly in terms of miniscule time savings are always shown to be greater than the considerable environmental costs.

Although electric vehicles have much lower carbon emissions than petrol and diesel vehicles (even accounting for the carbon from electricity and manufacture) and are part of the climate solution, the vast majority of road miles driven over the next ten years will still be by fossil-fuel vehicles. Even if the government brings forward the ban on new petrol and diesel cars/vans to 2035 (currently the policy is to ban them by 2040) more than three fifths of cars/vans on the road will still be petrol and diesel. In order to stay within a Paris-compliant fair carbon budget evidence suggests we need to make significant cuts in road traffic over the next ten years as well. And while electric vehicles are much better than fossil fuel vehicles for the climate, they have other environmental impacts, and do little to reduce road casualties and congestion.

But don’t people need cars to get around?

For many people they have little or no alternative but to drive due to the car-dependent way our communities have been planned and built, the high cost of bus and train fares or lack of services, and the absence of safe walking and cycling routes. The historic under-investment in public transport has led to increasing car-dependency: people are forced to drive in order to access employment and services. There are also many people who do not have access to a car: nearly a quarter of all households do not have access to a car, rising to 65% for the lowest income households. Too many people have difficulty accessing jobs, shops, parks and green spaces in much of their ‘home’ area.

Instead of spending billions on new roads which will create more traffic and lock in more carbon, we need to invest in healthier and more sustainable alternatives such as long distance cycle routes, electric bikes (which enable older people or people with health problems to cycle long distances), better bus, tram and train infrastructure and services, and plan and design our communities to be accessible to all without a car. And we can reduce the need to travel by remote working. And through electric car sharing schemes we can ensure that people who need them can still have access to a car without necessarily owning one.

What are the benefits?

Reducing traffic, the single biggest source of greenhouse gas emissions in the UK, and not building roads also has multiple other benefits

Neighbourhoods – which will be quieter with benefits for children’s learning and cognitive development.

What can you do?

Below is a template email to the council. Please feel free to adapt it and contact the council, your ward councillors and MP. Use these links to find their contact details:

Many councils are introducing emergency transport measures that address COVID-19, air quality and carbon emissions. Derby should do the same.

Please can you let me know what plans Derby City Council has to reallocate road space for walkers and cyclists?
Leicester has done this: https://www.leicestermercury.co.uk/news/leicester-news/light-lockdown-traffic-leicester-allows-4083625#comments-section
Scotland also has plans: https://www.transport.gov.scot/coronavirus-covid-19/
Here are some resources on reallocating road space:
What plans are there to stop a surge in car use and an increase in air pollution post-lockdown?
Especially as unsafe air pollution levels are linked to increased coronavirus deaths. https://www.bbc.co.uk/news/health-52351290
Will Derby City Council update their Air Quality plan to reflect the coronavirus risks and take more urgent, immediate action to keep air pollution levels low?
Will the council oppose the A38 works?
The planned A38 junctions works that are very likely to increase air pollution in Derby during the 4 years of construction are part of the Road investment strategy (RIS2) from the Dept for Transport. Many are now questioning the need for RIS2 and the value of £27 billion on roads with both the COVID-19 crisis and climate crisis. The Committee on Climate Change isn urging Ministers to reconsider road-building schemes and to invest in broadband instead.
There is also a legal challenge being raised against the DfT for RIS2 on the grounds that it breaches the government’s legally binding commitment to reach net zero emissions by 2050 .

If you get a response please let us know lobbying@rebellionderby.earth