Extinction Rebellion Derby staged a Die-in outside Derby City Council House as councillors entered for a full council meeting reviewing the budget for bus services and measures to tackle climate change.  Recent floods in Derby and Derbyshire, alongside international disasters, have put the climate and ecological disaster firmly in local people’s minds and we had a good turn out.  In contrast to other city councils in Nottingham, Wakefield and Bristol, Derby City Council has dragged its heels on the issue since passing a motion declaring a climate emergency in May 2019 and failing to meet their own deadline to create a plan to reduce emissions by the end of that year.

Check the full story reported in the news: Derby Telegraph article and another video of our samba band!

We staged a Die-in to signify the deaths to Derby people in the future if the council and other organisations don’t act quickly. 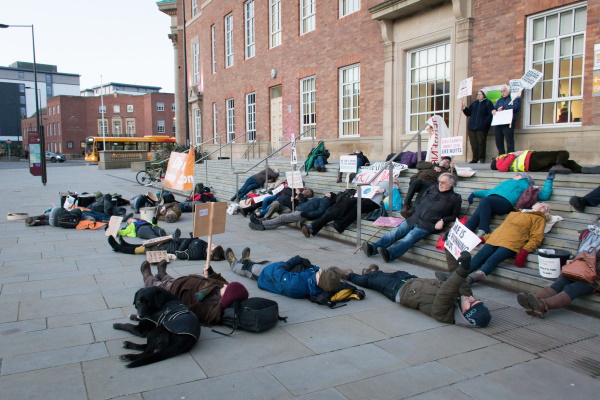 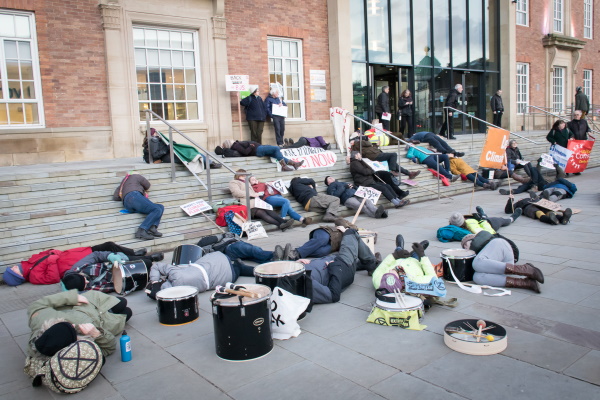 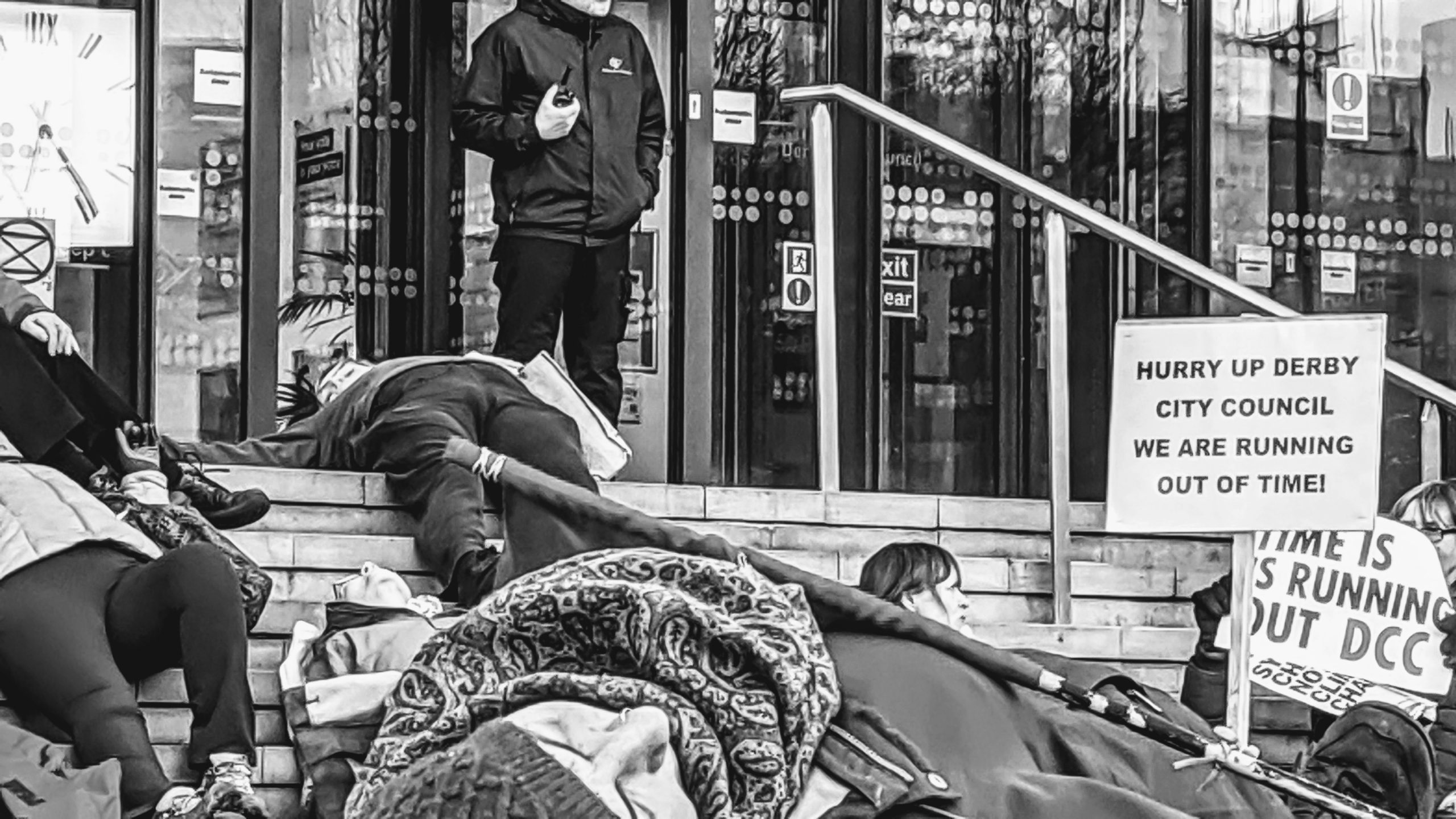 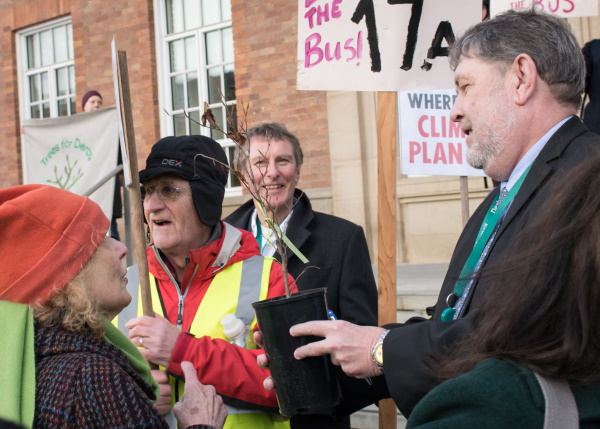 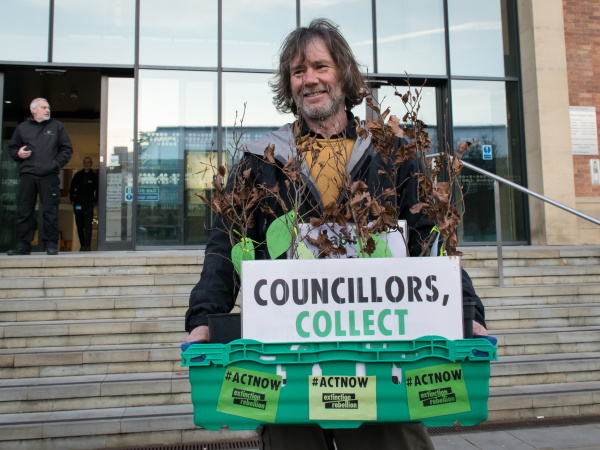 Other councils are taking it far more seriously! 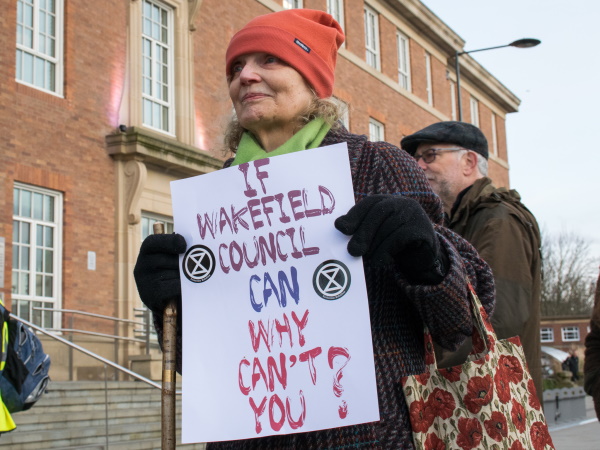 We talked to councillors about spending our taxes on fighting climate change like other councils are doing. 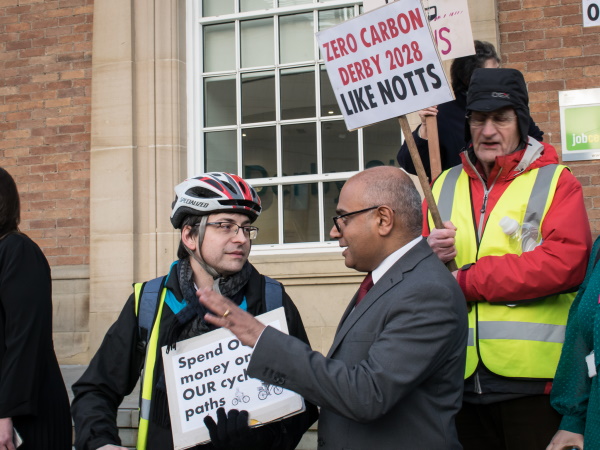 Banners and placards made our message clear to councillors and passers-by. 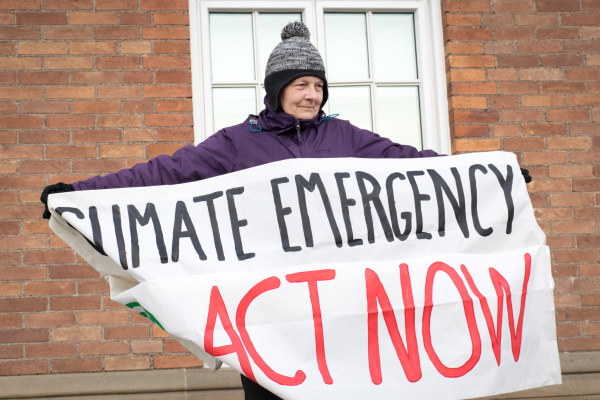 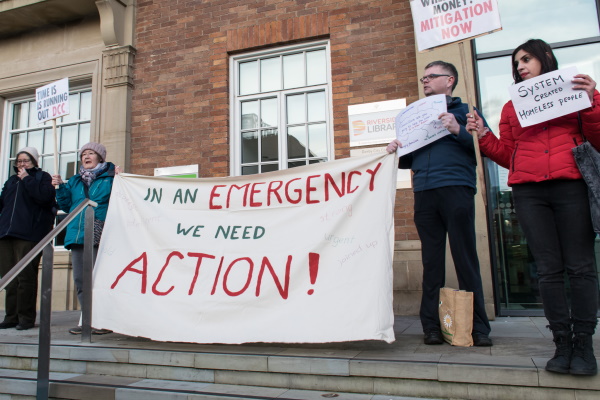 Other groups joined us in support. 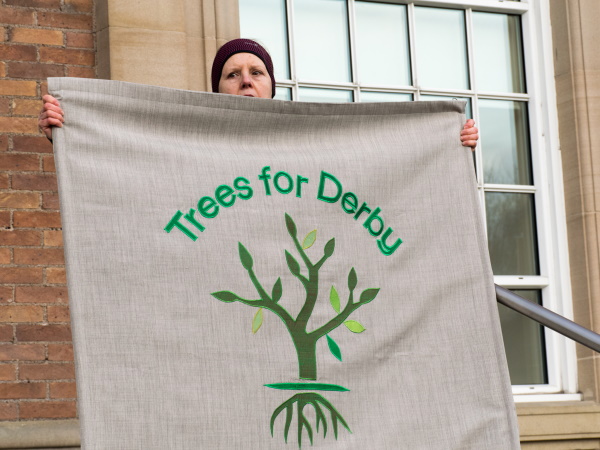 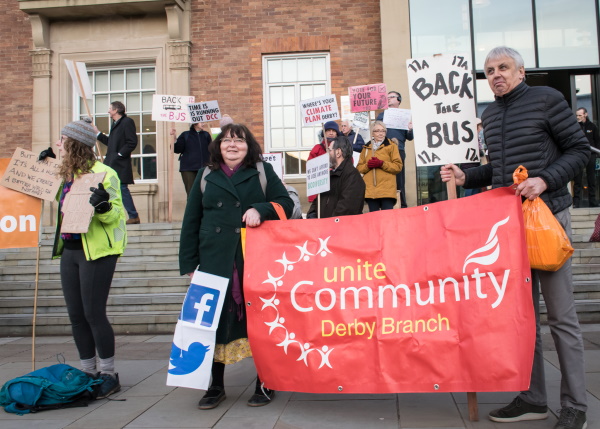 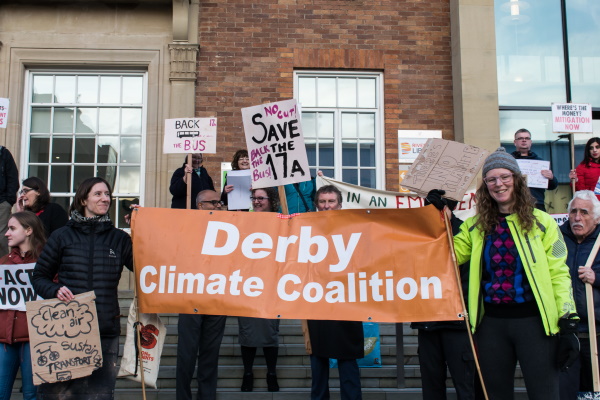 We spoke about how climate breakdown will affect all our communities. 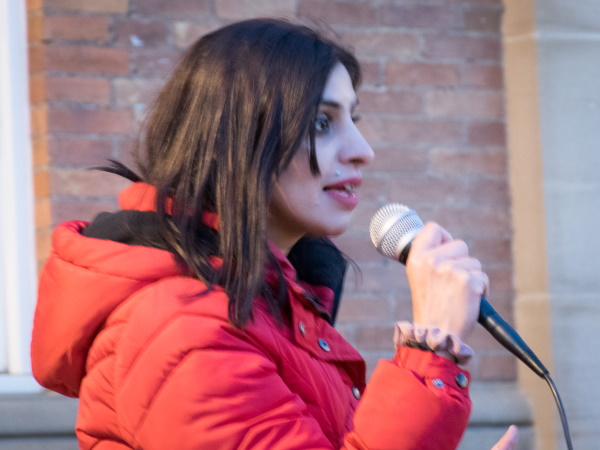 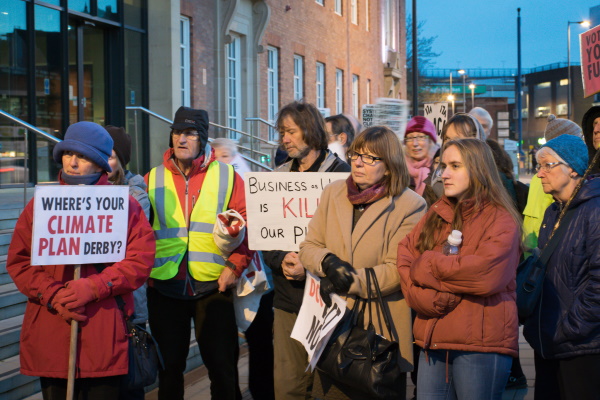 Protestors listened to councillor Lucy Care about how we can work together. 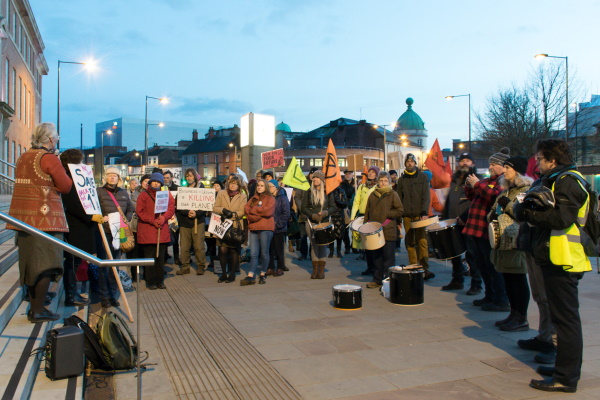 The leaders of the council were surprised at the number of questions on how the council’s decisions can tackle climate change. 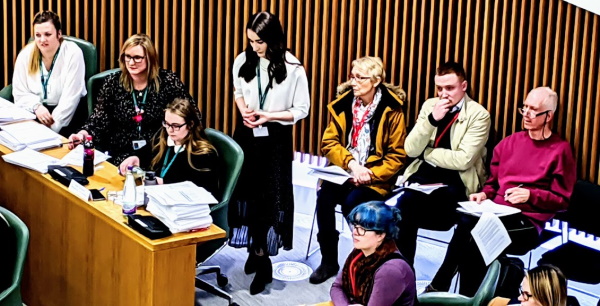 XR and public put questions to the meeting. 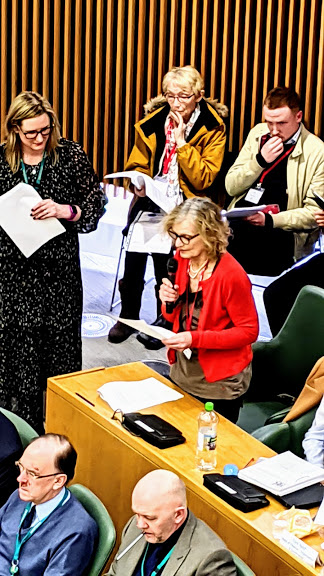 One XR Derby rebel had this to report from inside the council house: “The council sound system in the chamber was inadequate and led to confusion as we couldn’t hear the mayor. (I have written to them about this and lack of information for speakers).
The mayor’s attitude towards Penny​ was disgraceful. He was impatient, dismissive and seemed to want to rush everyone. There was support from some councillors but the responses were the standard stuff.
We will keep going  💪🌳🌱”

Another rebel was not allowed to enter and, when the rebel was supported by others, the council security admitted they were unable to give a satisfactory reason why this individual was not allowed but that they were equally unable to change the decision about it.  We had all followed the council’s request to leave our placards outside the chamber.

We were also there to demand the council challenge Highways England on the plans for the A38, benefiting outsiders but cause Derby residents disruption, pollution and environmental damage.  Read more about the A38 road development.

A great many XR Rebels and representatives from other groups joined other residents in the public gallery. The process has changed a great deal recently. Here is the experience in summary of one who had gone through the process to ask a formal question many times before, listing why this was different:

The council must lead, make real changes to all functions because the climate and ecological breakdown are non-negotiable and therefore beyond party politics altogether.

Some of the amendments were watered down and we will have to keep fighting for the council to make definite positive actions to bring down emissions and protect wildlife.

Don’t be put off

Engaging with councillors directly is often a positive experience because they want to hear the concerns of one of their voters.  It is unusual to have to go through intimidation when asking questions at a full council meeting and the recent changes in procedure must not be tolerated.  They are an obstruction to democracy.  Extinction Rebellion demands more democracy, not less. Complaints have already been made about the changes.

You can also meet councillors, along with other concerned residents, in a relaxed but organised meeting once a month called the Green Forum.  You can keep an eye on our events page for the next one or contact Derby Climate Coalition.

Councillors are happy to work with residents on issues that affect them.  Just ask.   Find out how to write to them.

One of the outcomes was that the 17a bus service we had campaigned for was saved again!  We demanded the council leadership did not backtrack on their promise to fund this, hiding behind a grant.  An amendment was agreed to fund it anyway even if they were not given the grant, thus securing this vital bus service.  This service not only reduces single user car traffic and pollution but saves older people from isolation in a village at the bottom of the hill they often struggle to climb.

Other measures including awarding funding to tackle climate change in other ways.

From the Derby Telegraph article:

He said: “I have been very clear that climate change is not just about the city council – citizens, communities and all of Derby’s businesses and organisations have their part to play.

“We have had a very good meeting this week of the working group that was set up to support the climate emergency.

“And I believe that we are the most committed administration of any in the history of the council regarding this agenda.

“That is why I have taken a strong and positive step to support the ongoing efforts by pledging an investment of £3 million over the next three years as part of our capital programme into a sustainability and carbon reduction fund.”

Overall the protest was effective in putting pressure on councillors to take the issues seriously in voting on decisions affecting climate change and ecological breakdown but not much achieved in this meeting. Derby City Council has a very long way to go to catch up with the likes of Nottingham so we will have our work cut out holding them to account, working with other groups in the city.

Thanks to all those who organised, turned up, travelled far to join us, played the samba drums, spoke with passers-by, handed out flyers, lay down in the Die-In, made/brought/waved placards and banners, spoke to the councillors, brought or gave saplings to councillors, chanted, checked in with each other, did something for the first time, sent positive messages, shared our social media posts, took photos. Thanks to those who joined us from Derby Cycling Group, Derby Climate Coalition, Trees for Derby, Unite Community, #PeakXR and many members of the local public.

Activism works and we set the tone for the council meeting.

What can you do?

Please keep the pressure up by writing to your local politicians.  Find out how to write to them.

Choose from the following points:

Many more ideas for how a city council can transition to a low carbon local economy and avoid ecological breakdown are set out in this guide:

We have a wide range of events to choose from.

Find out how else you can get involved.