NO GOING BACK: Extinction Rebellion demand action on Derby City Air Pollution and the Climate Crisis

Members of Extinction Rebellion are demanding Derby City Council take immediate action to protect its citizens from dangerous levels of air pollution. A spokesperson for the group said, “This is a matter of urgency regarding coronavirus and public health. The All-Party Parliamentary Group on Air Pollution has released a strategy document [1] regarding air pollution in the UK but Derby City Council has no plans yet to implement it locally.”

“Derby City Council must implement urgent transport changes now to keep air pollution at safe levels or risk a second peak of the virus. The Council will need to revise the draft air quality strategy which was written pre-COVID-19. [2] 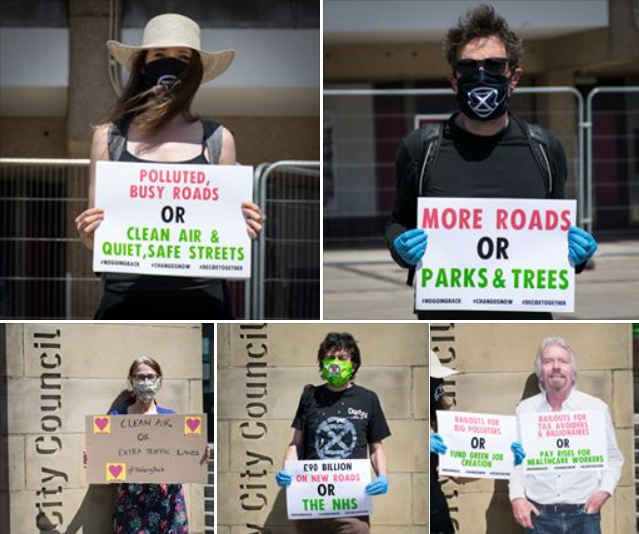 “Air pollution must be kept at low levels to help avoid a second peak of coronavirus infections, according to a cross-party report from MPs.

There is growing evidence from around the world linking exposure to dirty air and increased infections and deaths from Covid-19. Lockdowns cut air pollution levels in many places, but the MPs said measures were needed to ensure it remains low.

The report is based on evidence from scientists, businesses and local authorities and proposes a series of actions, including the continuation of home working, increased cycle lanes and training, more frequent public transport services to avoid crowding and the phasing out of wood and coal burning in homes. It also urges the rollout of clean air zones, currently delayed by the pandemic, and a scrappage scheme for dirty vehicles.

The launch of the report also revealed new evidence of a biological mechanism that could explain how air pollution increases Covid-19 infections and the suggestion that pollution could help explain why certain minority ethnic groups have been more affected by the virus. 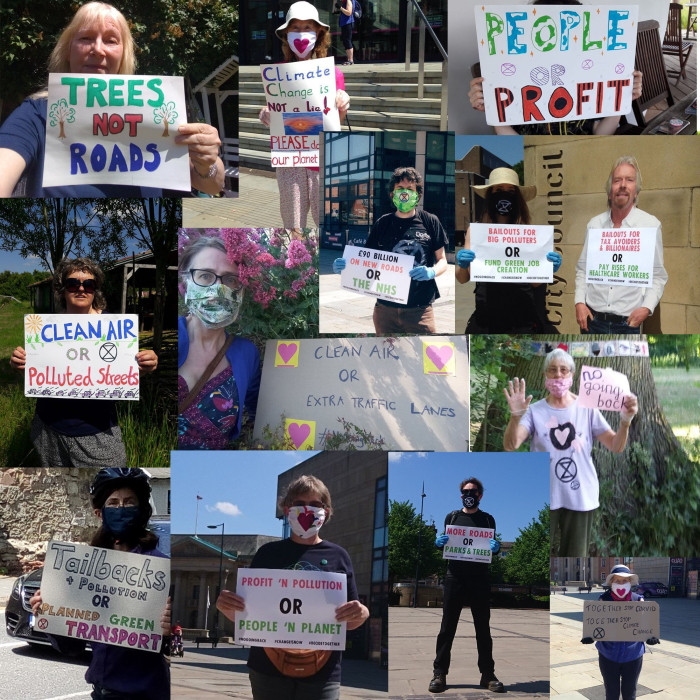 We need a wide-ranging air quality response as we emerge from lockdown and not an accentuated Covid-19 second peak because people get into their cars instead of using public transport or working from home,” said MP Geraint Davies, chair of the all-party parliamentary group on air pollution.

“Some proposals can be introduced immediately and will help to ensure that a second peak does not overwhelm the NHS,” he said. “All will deliver cleaner air over subsequent years to help to ensure better public health and greater resilience against future pandemics.”” As reported in The Guardian on 29 May [3]

Although Extinction Rebellion Derby welcomes the government investing an emergency £250 million to widen streets and bring in temporary bike lanes [4], Derby City Council has not used the money to bring in any of the emergency measures to make walking and cycling safer in Derby. Instead, they are prioritising vehicle users and allowing congestion and air pollution levels to rise again.

At the weekend, Extinction Rebellion staged individual, socially-distanced protests, standing separately in masks and gloves in the Derby market place and outside the Derby Council House. They held signs that gave the council a stark choice: “Clean Air OR Polluted Streets” “More Roads OR Parks and Trees”

“I am protesting within COVID-19 guidelines because Derby City Council has yet to make any of the emergency transport changes to keep air pollution levels low or reallocate road space so pedestrians and cyclists can social distance.” pic.twitter.com/5lD7VHqEmF

For more rebels’ reasons in this thread for highlights across the midlands from this amazing day of solidarity: see Twitter thread.

Previously, Extinction Rebellion Derby stencilled artwork on roads and pavements where road space should be reallocated. See our NO GOING BACK – RECLAIM THE STREETS campaign.

Extinction Rebellion Derby has put its name to a proposal to the Council by Derby Climate Coalition. See PROPOSAL FOR AN EMERGENCY COVID TRANSPORT PLAN FOR DERBY AND DERBYSHIRE

Another World is Possible

Locally Derby City Council has set up an economic recovery task force. So far the task force have lobbied the Government for airline bailouts. While workers in the aviation industry need to be supported, the industry itself needs to radically change if we are to avoid catastrophic climate collapse.

Derby City Council is still refusing to take air pollution seriously by prioritising the convenience of road vehicles over other public transport users, cyclists and walkers and continuing to support the £250 million A38 road works that are part of the Gov’s £90 billion road-building scheme.

[4] UK Government: £2 billion package to create new era for cycling and walking – “Pop-up bike lanes with protected space for cycling, wider pavements, safer junctions, and cycle and bus-only corridors will be created in England within weeks as part of a £250 million emergency active travel fund – the first stage of a £2 billion investment, as part of the £5 billion in new funding announced for cycling and buses in February.”