What: A series of actions to impartially engage the public in making an informed choice in the election, based on the climate and ecological crisis. Including a daily living statue, hunger strike, a weekend of informative silent gallery protests, giving talks and singing Green carols.

Members of Extinction Rebellion Derby will be putting the climate crisis in the faces of the voting public this weekend in Derby City Centre.  Standing in a silent grid they will let photographs of devastation, both local and global, speak for them. Also placards asking you to check MP’s voting records.

Activist, Edward Pickering-Symes told us, “We need to secure a proactive government which will make certain that we are prepared for future climate over-heating, flooding, and sea level rises, almost all of which are “locked in” through past emissions which will remain in the atmosphere for decades to come. We need to protect the biodiversity which gives our life support systems stability. And we need to change things so that our environment can start to recover. When deciding how to vote, Derby people must find out what their local candidates say they will do.  Contact them and ask them.  We have tools on our website to help. They can go to rebellionderby.earth/election and find impartial information on all parties and their local candidates.” 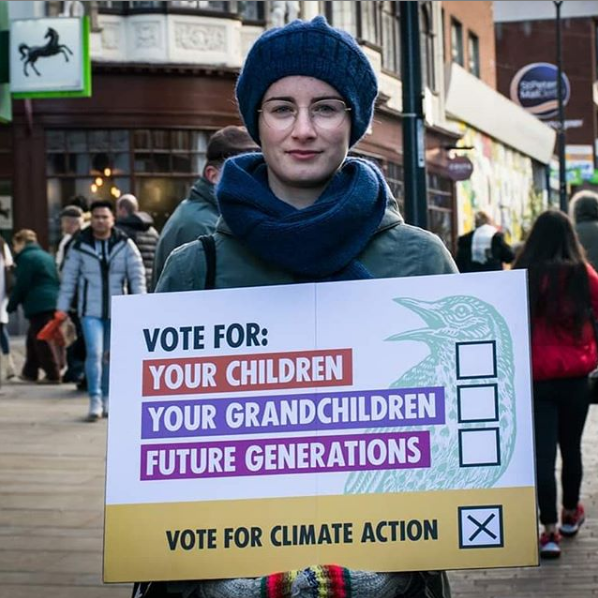 When asked why they were not pushing one particular party, Edward was adamant they wanted people to make their own choice, “Extinction Rebellion is an apolitical organisation. We are not supporting any particular party. We are campaigning to make the climate and ecological crisis the central issue for this election.”

Pictured are activists who stood in the town centre last weekend, with others talking to members of the public about the election and giving out flyers based on the climate and environmental sections of the party manifestos.

Talking to members of the public was very rewarding: 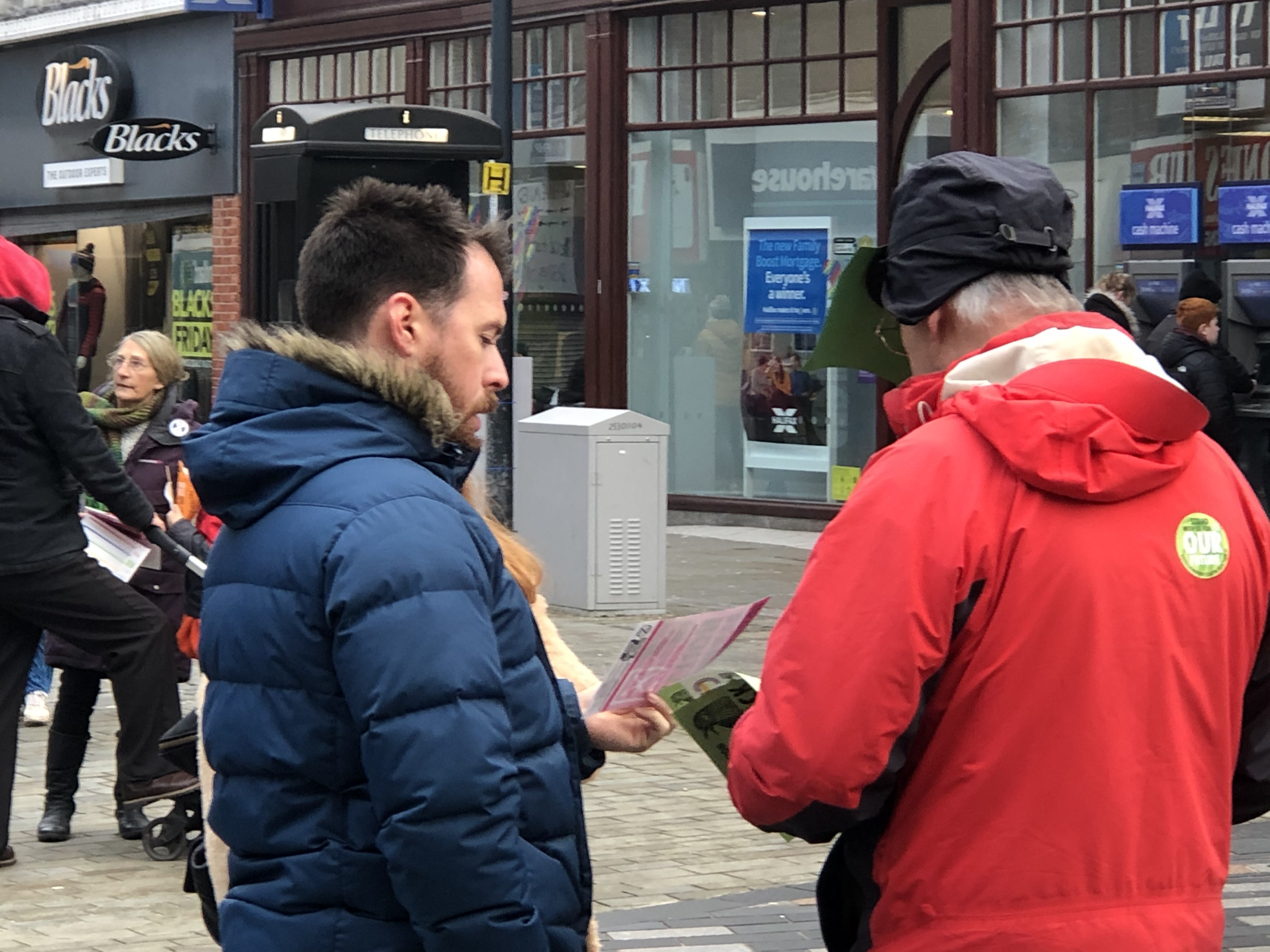 Singing for the Climate

We even sang in the ‘intu’ centre:

Our singers at the Compassionate Derby Festive Fayre on Saturday sang a selection of green carols written and kindly donated to us by Huw Morgan.

Some rebels are taking things further and participating in a global hunger strike. 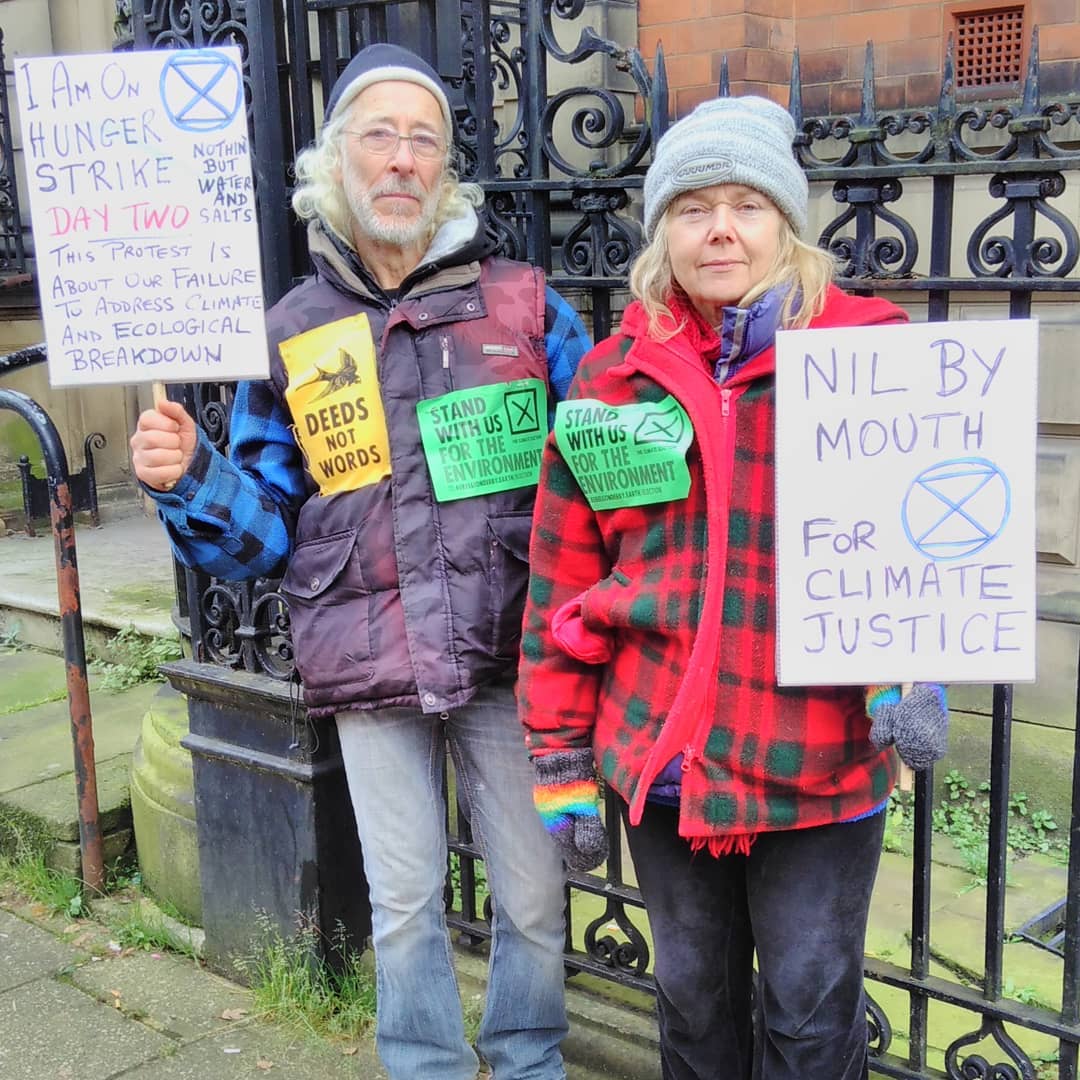 Mary Smail and Anthony Whitehouse are on hunger strike to demand that governments act on the climate and ecological emergency that threatens the extinction of a million species, the collapse of civilizations and the death of billions of humans.

They are on hunger strike in solidarity with people starving because of climate and ecological breakdown and to force governments to confront the crisis by enacting Extinction Rebellion’s three demands https://rebellion.earth/event/global-hunger-strike/

12:45 – 1:15 – Navigating Politics in the Face of Climate Crisis and Ecological Breakdown with Edward Pickering-Symes

The Time is Now – vote for climate and ecological action 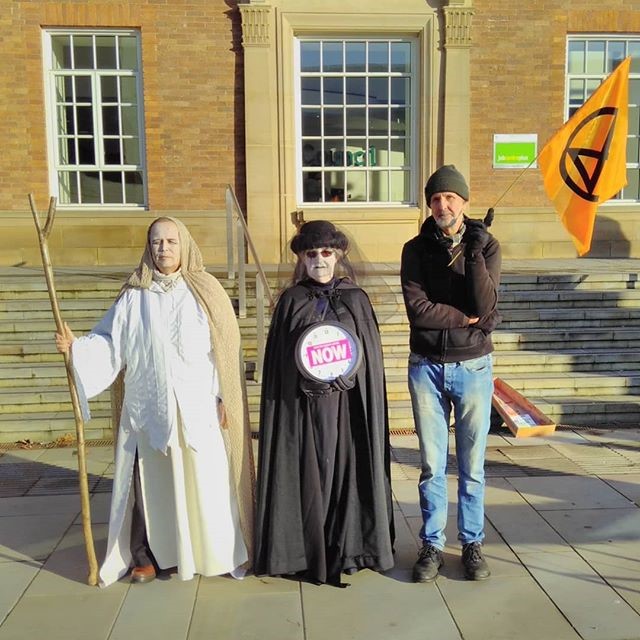 Extinction Rebellion’s living statues ‘Father Time and the Widow of Now’ will continue their silent vigil in Derby every day next week up to polling day on Thursday 12 December. Holding a clock with no hands, the message on its face reads ‘The Time is Now’ vote for climate and ecological action. Others will be on hand to engage with the public; handing out climate reality-check leaflets which focus on the climate and environmental sections of the party manifestos. 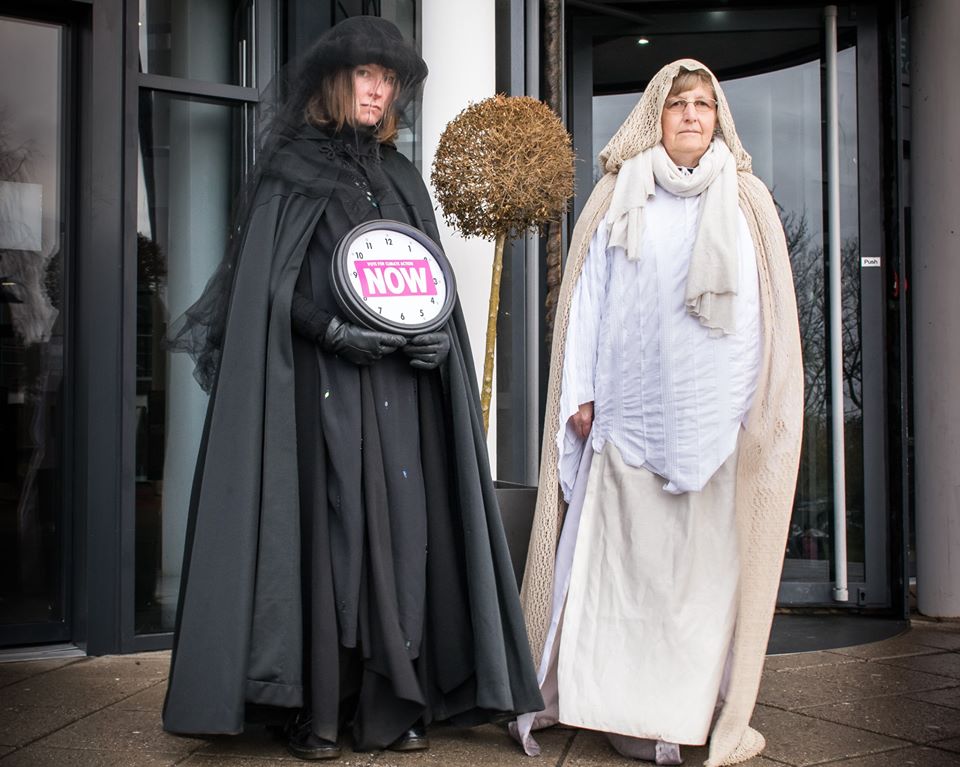 Our statues outside University of Derby last week as part of our #electionrebellion actions. We had a good response from students and lecturers making our case for making the climate and ecological emergency the most important issue to consider when they decide who to vote for.

Read more including what the parties are promising for the climate emergency, rated by different independent studies on our election page.